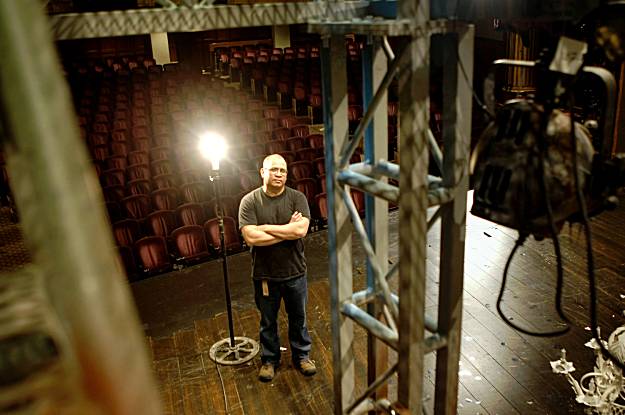 He makes sure there's no trouble on the set

Article by Edward Guthman, Special to The Chronicle
Monday, October 19, 2009

Miguel Ongpin got into theater to meet girls. His high school, Junipero Serra in , was an all-boys Catholic school, but the campus did co-productions each year with the all-girl campuses at Notre Dame High in and Mercy High in .

He acted and did backstage work, and when he enrolled at UC Berkeley, Ongpin continued his theater pursuits. Today he's head carpenter at the American Conservatory Theater, where he started in 1995 as a flyman - the person who oversees anything rigged in the air or flown across stage.

Onstage, we have four departments: properties, sound, lighting, and then there's me, head carpenter. I supervise everything, setwise.   "Head carpenter" sounds like I'm building the flats, but that's the job of the shop carpenters and technical director at our scene shop on . I'm in charge of actually bringing in the set, putting it up and making it work on stage.

You have to think visually, three-dimensionally. "What's the best way to do this?" I don't want to put up a tower and then realize I need all of my stage floor to put up a wall. So you put up the wall first and then the tower. That kind of thing.

I'm also one of the people you see changing scenery during a performance. I have a series of cues, which hopefully I've memorized by the third preview. I wait for the cue light, or the stage manager tells me through my headset, "OK, go." The curtain comes in. Reset those three chairs. Or move that flat.

A lot of shows the director, if he's goofy, will choreograph us into moving stuff. Like in "South Pacific," those guys have to get in sailor uniforms to move scenery. That's pretty funny. I've worn a tuxedo onstage.

A lot of times the stage goes to black and the actors can't see. It's freaky to be looking at 200 light instruments, and all of a sudden everything goes black and they have to get offstage. So I go out onstage and grab them. And what you have to do is grab them exactly the same way every time so they're the most comfortable. So they don't hurt themselves or freak out.

I like shows that involve the audience a lot, that bring them in. I also like big shows where you're really busy and there's a lot of moving scenery. I loved working on the Tom Stoppard show "Rock 'n' Roll."That was a beautiful forced-perspective set with a lot of automated and intricate scenic elements. It was a definite bitch to put up and tech, but it was worth it.I was definitely proud of that show.

Sometimes my hours are really bad, which is hard on the family. Like, in at 8 a.m., out at 11 p.m. Those are the days I'm loading in a new show and setting up for rehearsals. I work long hours for 2 1/2 weeks, throughout rehearsal. Finally you get the show open and relax into a show schedule: 6 to 11 p.m. four nights a week, 12:30 to 11 p.m. on matinee days.

One of the best moments for me is when I've set up the stage. We've finished the lighting and now we're in tech rehearsal. I might have a break before my next cue, so I'll walk around to the front of the stage to see how the set looks under the lights. I can appreciate what I've done and what my crew has done, and it looks really pretty under the lights.

I like the collaborative effort. At ACT we're able to cross departments, so if someone has a problem you're able to pitch in and help. There's a common goal at the end, which everyone wants to see. A good show. You know, a standing ovation. Happy audiences.