Serra High School is more than just a name. Our identity and distinctive brand represents who we are and what we believe. A significant aspect of the Serra brand, the image of Saint Junípero Serra, has a spiritual quality that taps into deeper emotional levels where identity and brand overlap.

Following the brand identity standards is critical to supporting the Serra brand, maintaining the visibility of Serra and underscoring its reputation as an exceptional Catholic college preparatory for boys. A distinctive brand is achieved by the use of consistent visual and messaging elements that frame and influence the way our audiences perceive us.

Our brand and style guide has evolved and expanded to become a cohesive and comprehensive scope of brand and identity assets. Its purpose is to ensure appropriate and strategic use of the school brand identity by all school entities. It includes examples of commonly used assets; approved colors, fonts, logos, and marks; examples of inappropriate use; and information about accessing the logos and marks. The brand standards are managed by our Marketing Communications Team. Our creative manager, Michelle Wilkinson, is available to assist you in the preparation of artwork and answer any questions that you may have.

A complete copy of our Brand Identity Standards booklet may be downloaded by completing the form at the bottom of this page.

The Serra primary logo, the singular visual symbol by which Serra High School is identified, is formed by connecting the wordmark to the Saint Serra Block S. The primary logo, an evolved version of the legacy school logo, is approved for use in all business communications, marketing materials and merchandising opportunities.

The historical significance of Saint Junípero Serra as a compassionate missionary who exhibited patience, humility and perseverance in his life’s work remains a key visual aspect of our primary logo. The addition of a walking staff to his left hand reflects the historically accurate depiction of Saint Serra as he traveled on foot throughout California in his lifelong quest to spread the Catholic vision of spiritual guidance. The staff reinforces and exemplifies Saint Serra’s courageous motto, Siempre Adelante, Always Forward as the new Serra tagline.

The primary logo may not be connected to, or paired with, any other artwork, photograph or typography to create a new design.

THIS LOGO MAY NOT BE REPRODUCED IN ANY OTHER COLOR COMBINATION OTHER THAN WHAT IS SPECIFIED ON PAGE FIVE OF THE STYLE GUIDE.

Serra's legacy Block S, redesigned in a more contemporary, robust and powerful image, is the foundation design element identifier. A brand extension of the Serra primary logo, the Block S supports and reinforces the Serra brand identity, yet also stands alone as a dynamic and visually compelling symbol. The border stroke width is always proportionally one-third of the fill stroke width.

The Serra legacy Block S has been part of the school identity since its founding in 1944. This stand-alone Block S symbol is the school’s alternate logo, a dynamic and visually compelling symbol. The Block S logo can be used by any school department or entity in any identity application or communication in which the audience and community is already highly familiar with the school’s primary logo, or when reducing the size of the primary logo will obscure the Saint Serra illustration.

school legacy block "s" GUIDELINES CAN BE FOUND ON PAGE six OF THE STYLE GUIDE.

Our school tagline and slogan are purposeful and engaging expressions of the Serra brand promise that symbolizes our school’s commitment to an exemplary education and spiritual focus.

Always Forward, Siempre Adelante is an inspiring, positive phrase that is a key messaging element of the identity system and exemplifies the ideals of Saint Serra that we use to direct our thoughts and behavior on a daily basis. It effectively communicates the real life example of Saint Junípero Serra’s profound commitment and lasting courage to stay true to his vision and goals, forever moving forward on the path to complete his life’s work.

The School Slogan:
Once a Padre, Always a Padre

Our school slogan is a natural, memorable and enduring phrase that creates an immediate emotional connection with our audience by revealing the proud essence of the Serra experience. It reinforces the identity of the school with immediate cognitive impact that reflects the shared legacy of our students—current and alumni—and their many future accomplishments.

School tagline and slogan guidelines can be found on page 23 of the style guide.

The Junípero Serra High School seal, the historical emblem of the school, was created when the school was founded in 1944. The artwork was designed by faculty members to incorporate the traditional and meaningful attributes of the legacy of Saint Junípero Serra. The modified seal features a two-color, sharper version of the seal while maintaining its original design.

Design Elements of Our Seal

At the center of the seal is the shield, or coat of arms, containing the three historical elements of the school’s original identity: the mission tower, symbolizing the church’s foundation on the missions that were established to spread Christianity throughout California; an open Bible that symbolizes the learning and sharing of the Catholic faith; and the cross—the core of all Christian symbols and a symbol of the school’s commitment to Catholic values and traditions. The cross, with the hands together, is the universal symbol of the Franciscan order, of which Saint Junípero Serra is a member. This symbol is also on the coat of arms of the Archdiocese of San Francisco. Note: In the original seal, the hand on the left represents Christ’s nail wound and the hand on the right represents Saint Francis’ stigmata wound. Circling the shield are the Latin words, “Etiamsi in via moriar non revertar,” which translates as, “Even if I die along the way, I will not turn back.” This was in reference to Saint Junípero Serra’s motto, Siempre Adelante, Always Forward, a strong expression of his profound commitment and dauntless will. The crosses used to separate the outermost, circular text of Junípero Serra High School emphasize our faith and heritage as a Catholic school.

The seal is designated for use only on official documents, prestigious gifts and specific ceremonial items such as commencement diplomas and certificates. It may NOT be used on letterheads, general publications, or marketing communications, either printed or online, unless approved by the Marketing Communications Team.

Color use is as significant and important as the images, symbols and marks that define serra's visual identity. The refined Serra color palette contains integrated color solutions and definitions adaptable for a range of marketing, merchandising, web and related communications.

Serra Blue (PMS 287) is a rich primary blue that conveys the deep, rich shades of the Pacific Ocean as well as the grace and dignity of spiritual wisdom and understanding.

Serra Gold (PMS 124) celebrates the golden state of California from its fields of bright yellow poppies to its rich gold treasures of the Sierra Madres. A highly visible color, golden yellow represents knowledge, uplifting optimism and enlightenment that accurately reflect our Serra community. 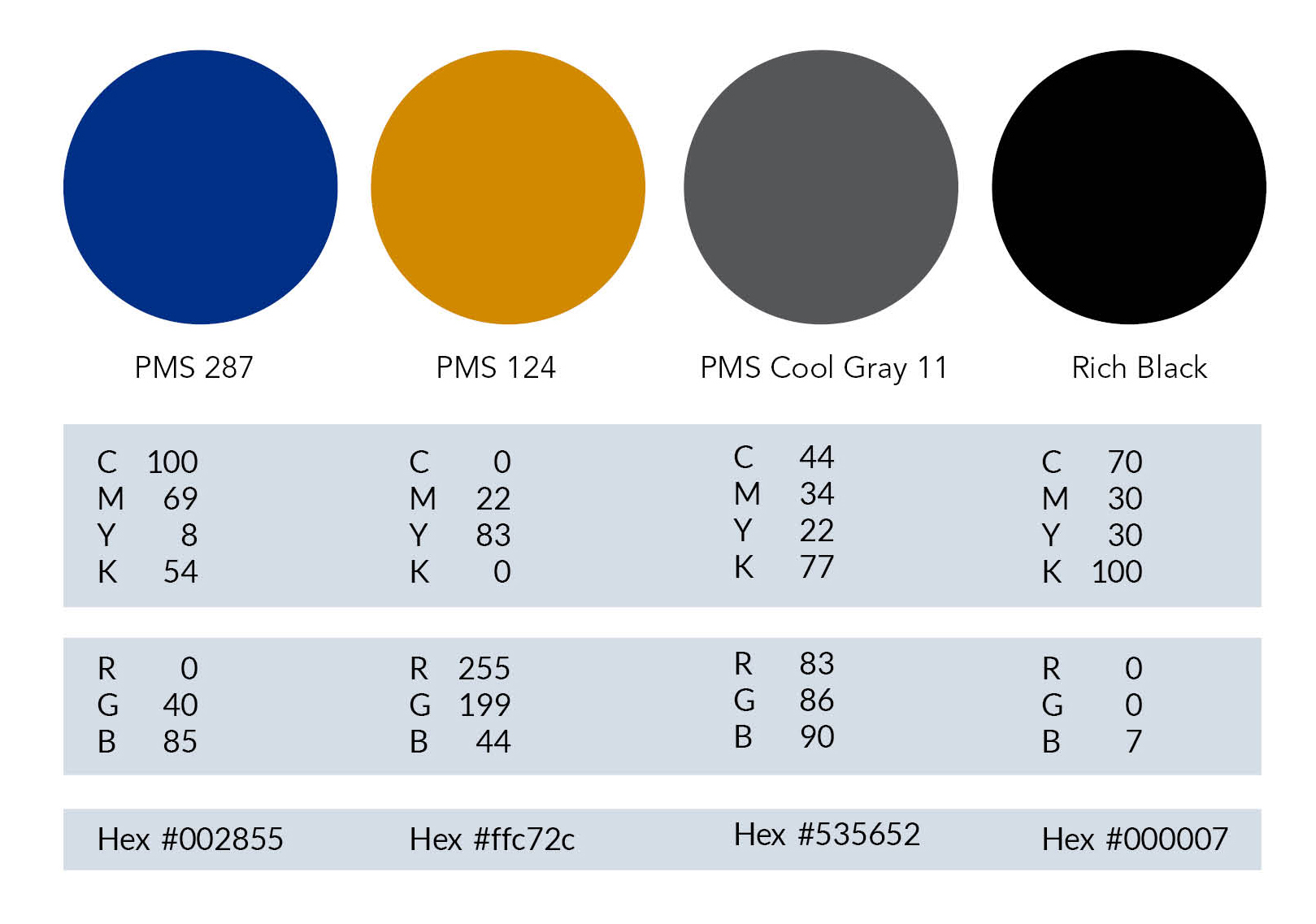 For accurate color guidance, please refer to page 13 of the style guide.

In the same way the Serra High School visual identity adds value to and enhances our communications, our brand voice is also a valuable asset when communicating to our internal audience, alumni, prospective students and parents, and the Serra community.

Please refer to page 26 of our style guide to view valuable information from the Associated Press Stylebook to help guide you in developing content and information for your intended audience.

Complete the form below to download a full copy of our Brand Identity Visual Standards booklet.