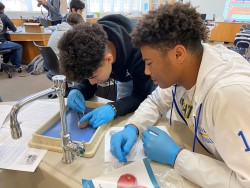 It's been an exciting few weeks in Dr. Tara Mann's Human Disease and Physiology class. In the span of two weeks, students dissected a sheep's brain and also visited the Body Worlds Decoded exhibit at the Tech Interactive in San Jose.

"The students really learn a lot from this type of hands-on learning," Mann said.

Students began their lesson on brains and were assigned different portions of the brain and created models of those parts. As a class, students used each other's brain models to learn about each part of the brain.

One sheep's brain was given to every four students, who then sliced the brain in half and were paired in two to dissect half a brain. The sheep brain is similar in structure to the human brain and is a good size to work with, Mann noted.

"It was fun to see the students–they was a big build up about it," Mann said. "Some were asking about the white and gray matter, and others were interested in finding something else," she said.

\Mann said she plans to also have students dissect the eye, heart and kidney of a sheep and also a whole pig before the year is over.

Mann said students were fascinated by the Inside Anatomy section–even one student with a shoulder injury said he enjoyed seeing the plastic model of his injury.

"It's so interactive, the students were so interested in seeing the body from a distance," Mann said.