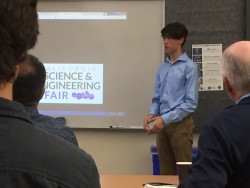 Students in Creative Solutions for the Global Good presented their final capstone projects on May 2 to a group of teachers, staff members and parents. The class is part of the Design-Led Innovation Program offered to sophomores, juniors and seniors. The capstone projects represented nine months of research, interviews, prototyping and testing using the design thinking protocol developed in partnership with SAP. Students were challenged to address a problem that had a personal meaning and represented a pressing community issue.

"A major focus of our work with this class is finding ways to get students to see themselves from a new perspective, not just as learners, but also as people capable of exploring creative possibilities that can significantly improve the lives of others," said teacher Rushton Hurley.

Junior Juan-Pablo Roa focused his capstone project on the sport of golfing–specifically, how to reduce the frustration of new players as they try to learn the sport. Roa interviewed dozens of golfers, researched current teaching tools and pondered several solutions until he came up with "Paco," a virtual golf buddy who is linked to an app. Paco can advise a novice golfer about which club to use and where to aim. He also offers encouragement on the green!

Junior Charlie Thrift's challenge was how develop an alternative to chemical fire extinguishers for airplanes. After extensive research, he designed a prototype that uses sound waves to extinguish flames. Sound can work to put out fires but only at certain frequencies. Designing a box that is functional, effective and reliable has taken many iterations. He might not yet have a commercial model ready for sale, but he has made tremendous progress and hopes to continue working on it even after the class ends.

Seniors Matt Muscat and Wyatt Walter tackled the issue of trash. They explored reasons why people discard garbage in public places and found possible solutions to proper garbage disposal. Muscat focuses on rewarding Serra students for recycling, composting and reducing waste. He showcased smart receptacles as part of his solution.

"One of the most important lessons I learned was project management," Muscat said. "I had never before worked on a nine-month project with so many twists and turns."

Walter analyzed pollution at beaches, interviewed beach-goers and talked to nonprofit and city government officials who are trying to diminish ocean trash. His solution included tractor rakes, new trash cans and extensive educational signage to alert the public about the hazardous effects of trash on birds, mammals, fish, turtles, seals and other aquatic life.

"What seemed like an easy solution when I first looked at the problem turned out to be much more complicated once I started talking to different stakeholders and community members," Walter noted. "However, it was an incredibly fun and rewarding experience–definitely a class unlike any other I've taken at Serra."