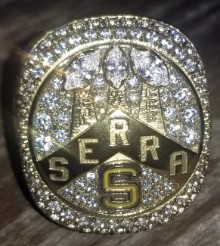 It wasn't how the varsity football team coaches envisioned this year's end-of-season awards banquet, but the team did hold a Zoom awards ceremony tonight and celebrated the thrilling football season this fall.

Seniors received Serra inscripted rings at the tail end of the evening. A huge congratulations to the entire football team, and especially to the graduating seniors. The football coaching staff took the time to say a few words about each individual senior.

Here is a list of the awards that were given tonight:

Most Valuable Offensive Back: Terrence Loville

Most Valuable Defensive Back: Jackson Lataimua

Defensive Back of the Year: Jackson Lataimua

Quarter Back of the Year – Daylin McLemore

Kicker of the Year – Damon Lewis

A huge thank you to the parents, families and coaches who continue to support the Serra High School football program. Special thanks to the team moms and supportive families who contributed time, food, energy and enthusiasm to Serra's program.