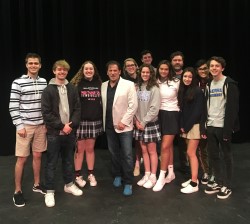 Jeff Foster '78 loves to tell a good story. He discovered his passion for the stage at UCLA when he auditioned for Ubu Roi, which was directed by Oscar winner Tim Robbins.

Robbins went on to found The Actors' Gang in 1981 with Foster and other young artists whose mission was to build a theater that presents relevant, thought-provoking plays. During the past 37 years, The Actors' Gang has produced more than 200 plays in Los Angeles and the actors have performed on U.S. and international tours. Over the years, the ensemble has included Jack Black, John Cusack, John C. Reilly and Helen Hunt. Foster performed with his "Gang mates" on five continents in a production of Orwell's 1984, which was an adaptation by Michael Gene Sullivan, a longtime member of the San Francisco Mime Troupe.

Foster returned to Serra on April 30 to speak to Tri-School drama students in the auditorium. In addition to dozens of plays, he has appeared in several movies and television shows. He worked with Robbins and Morgan Freeman on The Shawshank Redemption, and again with Morgan Freeman and Clint Eastwood in Million Dollar Baby. Other credits include Jarhead, The Insider and Flags of our Fathers.

"I love acting because the audience is transported into a story and you're giving people an emotional experience," Foster said. "Whether you make them laugh or cry, you're removing them from their daily lives. Who wouldn't want to be part of that? When I'm lucky enough to act in a film or perform on stage with The Actors' Gang, we're building community. I think it's important, particularly during these times, to feel part of a community."

The Actors' Gang has a special community outreach program for incarcerated adults called The Actors' Gang Prison Project. Actors have brought the gift of theater inside the walls of 12 California state prisons.

"The point of the program is to help people who are incarcerated to rediscover their emotional fullness," Foster explained. "We establish groups within each prison and teach seven-day intensive workshops using theater techniques to help them explore their emotions. We find in the prisons that many men and women must smother expressions of fear, sadness and joy–it's not easy to process these emotions if you want to survive in prison, particularly in the men's prisons. But they are natural emotions, so it's great to be able to help them to express their sadness, anger, fear and joy again safely in a supportive, ensemble- based environment."

Senior Galvin Yuan was inspired by Foster's talk. Yuan will major in musical theatre this fall at the Manhattan School of Music.

"It was awesome to see how Jeff has channeled his love of acting on stage to helping humanity," he said. "He is teaching people in prison how to be human again."

Foster said his work with The Actors' Gang has been a transformative experience.

"It's an amazing catharsis that happens and an awakening of self," he explained. "The (prisoners) are reintroduced to their souls and rediscover their dignity, sense of empathy and community. If we can help to redirect people to find optimism and a new purpose, it's a gift we share."