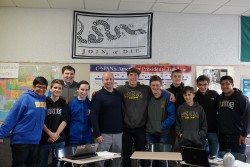 Serra Assistant Director of Advancement Jonathan Allen '01 spoke to members of the Democracy Live Club last week about his experience on Capitol Hill.
As an intern in Washington, D.C. for Congresswoman Lois Capps (D-Santa Barbara), Allen learned about the structure of a legislative office. He enjoyed sitting in on Congressional hearings, attending Congressional briefings in lieu of congressional staffers, and leading tours of the U.S. Capitol. When he returned to California in 2007, he worked in Congresswoman Anna Eschew's Palo Alto office (D-Palo Alto). Allen's duties including writing press releases, speeches and overseeing a broad portfolio of issue work and case work.
"I really enjoyed talking about my career journey and government service in general with the Democracy Live Club," Allen said. "It's important for students to know that most people start out in entry level positions, but hard work and knowledge can help you to ascend the ranks."
Allen stressed that a thirst for knowledge will set them apart, especially when participating in an internship.
"Knowledge is king," Allen added. "Information is ubiquitous at this point in our society. Investing time into policy research and the current state of political affairs will set you up for great careers. It's critical for our nation's teenagers to become engaged in the political process. This portends a motivated voting populous in the future that will be knowledgeable about our political and governmental structures."
The Democracy Live Club is moderated by Serra history teacher Sean Dugoni '89. Club members were intrigued by Allen's talk, and they had lots of questions.
"The Democracy Live Club allows us Padres to engage in debate about the political issues of day with candor and mutual respect for our viewpoints, said Club President Nick Lochrie '19. "Debates can get divisive, but all of us bring an open mind to listen and learn from different viewpoints and ideas. We seek common ground and a path of empathy toward those who we don't necessarily agree with. We care about the future of our government, and that is what's special about the Democracy Live Club."