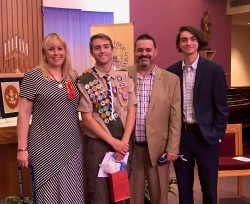 Gandhi once said, "The best way to find yourself is to lose yourself in the service of others." Muhammad Ali echoed that sentiment in a different way – "Service to others is the rent you pay for your room here on earth."

Matt Lowenstein '19 was honored in the Serra Chapel on June 29 for becoming an Eagle Scout. Since 1912, only 4 percent of Boy Scouts have earned this prestigious honor. Requirements include earning at least 21 merit badges. Matt earned 24. He and his brother, Ryan '16, were members of San Mateo Cub Scout Pack 133 and Boy Scout Troop 42. During his Eagle Scout ceremony, Matt was joined by his parents, Chris and Jeff '86 Lowenstein, Ryan, his grandparents, former Scoutmaster Tony Villanueva, several family friends and fellow Padres, and a few members of Boy Scout Troop 42.

At Serra, Matt was the Class of 2019's spirit officer for three years and served as vice president of the Executive Student Council during his senior year. He said the best advice he received as a freshman came from Ryan, who encouraged Matt to get involved and try new things.

In 2019, Matt was chosen as one of three Serra delegates to Boys State, a summer leadership and citizenship program sponsored by the American Legion. A member of the National Honor Society and the California Scholarship Federation, Matt is an excellent student who managed a rigorous course load while maintaining a 4.13 grade point average. He also was a yell leader, a sports reporter for the Serra Friar newspaper, a member of the Mission and Brotherhood Advisory Team, and a member of the basketball, pole vaulting and crew teams.

Matt has always had a passion for landscape architecture, which he plans to pursue at Cal Poly. Working with Serra alumnus Mike Callan '86, his passion for this field grew. Mary's Courtyard was in desperate need of a makeover. Callan oversaw the extensive project last year. Matt buried a time capsule in the ground to celebrate Serra's 75th anniversary. Inside the time capsule are photos of current students, a copy of the Serra Friar newspaper, local newspapers, a West Side Story playbill, masks from the Art Department, Traditions magazine, a basketball, and a 2017 football state championship ring. In 25 years, the time capsule will be retrieved on Serra's 100th anniversary. Matt will be 43!

Matt and his friends also assisted Callan with the beautification project by installing more than 50 plants. A longtime family friend, Callan attended the Eagle Scout ceremony and commended Matt on his work ethic, dedication and passion for the landscape architecture field.

"Matt prepared detailed drawings for the time capsule garden, including researching drought-tolerant plants that surround the capsule," Callan noted. "He and his team of volunteers set the time capsule in concrete and planted the shrubs and ground-covers outlined in his landscape plan. In addition to being a quick study and very inquisitive, Matt was flexible and worked well in a collaborative environment."

"When I think of Matt, I think of his commitment to service," added Director of Media and Public Relations Antonia Ehlers. "It has been a privilege to watch him grow in service to others here at Serra. We are so grateful for his service to our school. Matt is a kind, caring and compassionate leader who always strives to do his best. We wish him the best of luck at Cal Poly and can't wait to hear about his next adventure!"