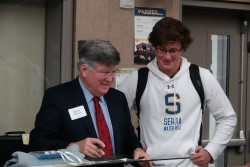 The pages of history came to life for students in AP History on Monday, when they enjoyed an engaging lecture by Pulitzer Prize-winning historian David M. Kennedy.

Kennedy, professor emeritus at Stanford University, is the author of a widely-used AP US History textbook, The American Pageant. The book was co-written by Kennedy, Lizabeth Cohen and Thomas A. Bailey. During the lecture, Kennedy gave a lecture on the moral and practical implications of the use of the atomic bomb during WWII. He spoke to a standing room-only crowd in Serra's music room.

"Dr. Kennedy brought a subject that most students have a lot of knowledge about into new light by telling intriguing stories on both sides of the conflict," said Eric Yin '20. "As an adult, he was able to connect with us through contemporary jokes and fascinating new facts."

"I enjoyed Dr. Kennedy's insight on the history of the atomic bomb and his ability to answer questions at a moment's notice," said Matthew M. Collins '19. "He has a great historical mind and he's a great scholar. I loved his presentation and I love AP U.S. History."

"Dr. Kennedy has been on countless documentaries and has been sought out for council by several presidents," Carey noted. "When President Clinton visited Stanford with his daughter, Chelsea, on their college visit tour, Clinton said he wanted to see one class - David Kennedy's. He's a remarkable speaker and a gentleman. Dr. Kennedy's presence on our campus was an honor. His historical insight and wisdom is profound. It's not every day that our students get to hear a Pulitzer Prize-winning author and Stanford professor!"