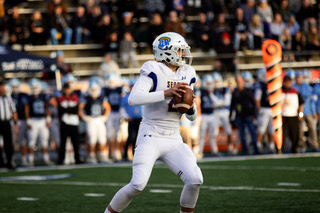 Serra Quarterback Daylin McLemore has been named the
San Mateo Daily Journal's Athlete of the Week for his inspiring performance in Saturday's CIF Division 1-A State Championship game against Corona Del Mar.

While the Padres came up short in the end, losing to CDM 35-27, McLemore showed enormous grit and support from his teammates and the Serra community for overcoming an injury to his non-throwing arm earlier in the season and making the start in the state title game on December 14.

McLemore's incredible athleticism, leadership and determination were repeatedly on display throughout the evening as the Padres fought to the bitter end.

While he ultimately re-aggravated the injury after a late hit in the fourth quarter and was unable to finish the game, McLemore showed that he has the heart of a champion.