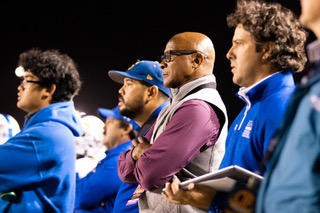 In a game that came down to the last seconds, the Serra Padre football team fell just short in their quest for a state championship, losing to Corona Del Mar Saturday night in an intense display of sportsmanship, dedication and passion.

Serra supporters boarded flights and hit the road last weekend to attend the game, which ended with CDM defeating the Padres by a score of 35-27 at Cerritos Junior College.

While the team came up short on the scoreboard, Padre Pride was in full display both in the stands and also at a pre-game alumni and supporters event in Cerritos, according to Serra Chief Advancement Officer Mike Fadelli.

"A huge shout out to all of those who traveled south to represent the Padres," said Fadelli. "The Padres were well represented -- the tailgate was a sea of blue with strong representation from our SoCal Alums, plus a ton of parents and community members getting together at Eureka restaurant before the game."

Spotted on the field once the game started was legendary Hall of Fame wide receiver and Serra graduate '70 Lynn Swann who came to root for his alma mater.

This was the Padres' third trip to the state championship game in the last four years.