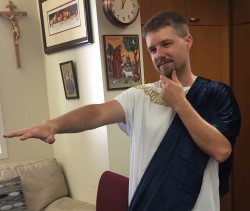 Aristotle is in the house! Philosophy teacher Chris Buckels '01 brings famous thinkers to life in his popular new class. He appeared in character in several recent classes, which delighted Padre philosophy students.

"The main objective of the philosophy class is for students to think, write and speak more clearly, concisely and critically," he noted.

Senior Thomas Dunn has enjoyed studying the philosopher Parmenides. "I really like Dr. Buckels' class because I've learned how to break things down much more than I ever thought I could," he said. "We have learned how to dissect each part of an argument and read between the lines. It's astonishing to me that Socrates didn't write anything down -- his teachings were verbally passed down through the generations."

Aristotle, Socrates and Plato would be proud!