We are proud to announce Always Forward, the Campaign for Junípero Serra High School—the single, largest campaign in the history of the school.

“We are very excited about this campaign," said Serra President Barry Thornton, Ed.D. "The initiatives supported in this effort propels Serra forward and keeps us at the forefront of providing an outstanding Catholic educational experience. We are immensely grateful for our alumni, current families, board of regents, campaign leadership team members and the friends of Serra who are supporting this campaign and helping us to move forward.”

The campaign, which will support the Stinson Center for Learning and Innovation, classroom renovations, athletics facilities enhancements, endowment and scholarships, has been privately gaining momentum since 2021, already achieving 71 percent of its overall goal.

A bulk of the campaign dollars have already been invested in the Stinson Center for Learning and Innovation, a 13,000-square-foot space that will house a learning commons, design-led thinking lab, global connections program and collaborative spaces for student engagement. This $17 million learning facility will open to students in March 2023.

Advisory Board of Regents

Our Case for Support

Stinson Center for Learning and Innovation

We will continue to keep you updated on the progress of our campaign through our Always Forward Campaign Chronicles.

While we continue to chip away at the Stinson Center for Learning and Innovation, we are hitting many construction milestones in the administrative and academic wings at Serra High School.

Our elevator passed state inspection and is in operation for those students who physically need help getting from floor to floor. Our academic administrative team is moving back into the administrative offices and will be in operation beginning next week. They are happy to join the counseling team, who moved back into their offices a couple weeks ago. Our open foyer is closer to completion and we will be welcoming students to our new front offices in the coming weeks.

We are also excited to announce that the bathrooms on both floors will be open to students and faculty and staff this week. One student and one faculty bathroom on both floors were completely renovated and are now equipped with all new, upgraded features.

It’s an exciting time to be on campus and to witness these improvements for our students. 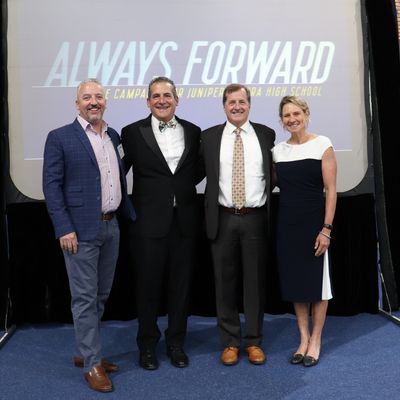 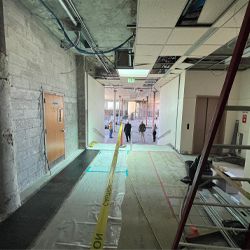 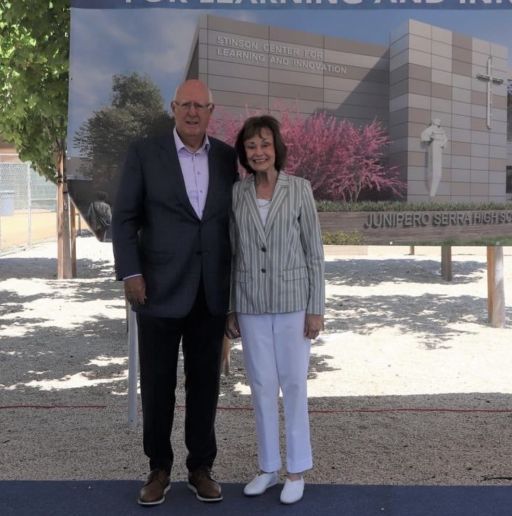 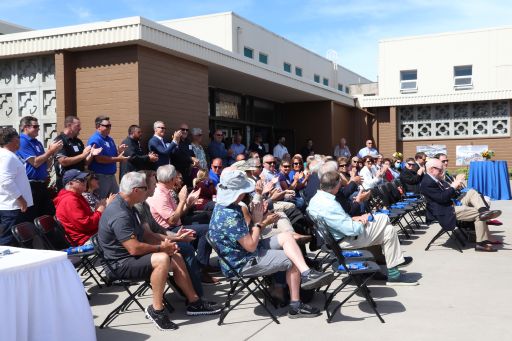 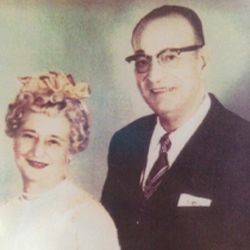 Serra began with a comprehensive renovation of the school's academic wing. In 2020, the school completed an initial $500,000 electrical infrastructure upgrade that would allow progress forward on the larger project. The following summer, Serra contracted with Ratcliff Architects and Hathaway Dinwiddie Construction Company to begin the complex renovation of the academic classroom.

Working closely with the design team, the leadership team decided on a phased rebuilding plan that would allow renovations without having to move students into portables during the school year. The initial design and construction were completed in the summer/fall 2021, and included four classrooms, HVAC in 10 classrooms, seismic upgrading, and a department office.

In line with the plan, the design team spent the 2021-2022 school year completing the architectural design and building plans for the next phase of the project, the Center for Learning and Innovation. Serra secured loans, financing and philanthropic support in preparation for the significant renovation.

The new center will provide a home for the design thinking room and Serra’s design led innovation program, where global student collaboration, creative thinking and inspirational problem solving will be the curriculum for the day. In its fifth year, the program is the envy of the region. Using design-thinking principles, students create a culminating project in Solutions for the Common Good. The new Design Led Innovation Lab provides students a dedicated space to create, think and brainstorm. This space will inspire and fuel student imagination and collaboration. This is a space where students learn and recognize that they can make a difference with their academic contributions.

This past year, students in the Creative Solutions class presented Ted ED talks with the Nagoya International School in Nagoya, Japan. Serra also partnered with Parklands- Parklands College, South Africa throughout the year. For the final presentation, we invited guests from all over the world and had 19 different countries represented.

Serra Global extends this reach with speakers who inspire Padres to see beyond the walls, with the only limitation being their imagination. Speakers have included Brett Kopf, Co-founder of Remind, which as been described as the most successful educational technology app in history; Azure Grimes from Libraries Without Borders; Lex Gillette, a globally recognized Paralympic track and field athlete for Team USA; and Carey Nachenberg, who spoke about autonomous vehicles and the complexity of science and business.

These programs will leverage professional expertise and an innovative spirit that will support and ensure an exceptional educational experience for our Padres and will catapult Serra into a leadership position in the country.

Stinson Center for Learning and Innovation

Junípero Serra High School is pleased to announce the construction of the $17 million Stinson Center for Learning and Innovation. The 13,000-square-foot learning space, previously known as the Zoph Library, will be reimagined  into a state of the art student center. The project is made possible by the incredible $7.5 million donation made by Serra Alumnus Ken Stinson ‘60 and his wife Ann Stinson.

On Wednesday, June 8, the Serra community gathered to host an official ground-breaking ceremony and reception to celebrate the building of this extraordinary project. Members of the alumni community, the parent and student community, the Board of Regents, faculty, staff and student leadership attended the ceremony, which was held in a cordoned off area in Mary’s Courtyard. The ceremony included a drop down vinyl sign with an artist’s rendering of the sleek and modern easter facade of the new building.

The Stinson Center for Learning and Innovation is a project that comprises the next phase in Serra’s comprehensive renovation of the academic wing. This state-of-the-art facility will house a learning commons where students can be inspired, collaborate on problem solving and create “solutions for the common good.”  The space will accommodate a presentation center for speakers to share ideas and teachers to engage their students and colleagues in research.

Serra’s design-led innovation and Serra Global programs, where the walls of class extend across continents, will find a home in the new facility. Parents, students and faculty will use the new space as an event center to gather in celebration.

Ken Stinson is the Chairman Emeritus of Peter Kiewit Sons’, Inc., headquartered in Omaha, Nebraska, one of North America’s largest and most respected construction and engineering organizations with 2021 revenues of $12.1 billion. He is a 1960 graduate of Serra and a 1964 civil engineering graduate of the University of Notre Dame. Ken served two and a half tours in Vietnam as a Company Commander with a U.S. Navy SEABEE Construction Battalion. After his military service, he returned to school, earning his Master’s Degree in Civil Engineering from Stanford University. He joined Kiewit in 1969 and was assigned to some of Kiewit’s most notable projects, holding various engineering and management roles. Ken was elected to the Peter Kiewit Sons’, Inc. Board of Directors in 1986, named CEO of Kiewit Construction and Mining Group in 1992 and Chairman and CEO of Peter Kiewit Sons’, Inc. in 1998. He retired as CEO in 2005 and Chairman in 2012.  Over the past 40 years in Omaha Ken has held leadership positions in numerous civic and charitable projects and organizations.

Ken and his wife Ann have six children and seven grandchildren. Three of the children live in the San Francisco Bay area, one in Los Angeles and two in New York City.

thank you to our Lead Investors